Sometimes life has the ability to scar. Thinking back, I can remember many events in life that have drawn blood. Sometimes the blood drips and a few days later the scar heals but other times the blood drips and the scar takes months or years to heal. The devastation that Hurricane Harvey unleashed upon the Texas Gulf Coast has undoubtedly drawn blood from myself and just about everyone I know. The scars left will take a longtime to heal; some fast, some slow but some permanent. All scars are life changing events regardless of if they disappear. If nothing ells, I might remember the initial pain after infliction but over time that pain is dulled and diluted with other pains, prides, triumphs, failures, wins and losses… Life goes on. Someday I will look back at all of my scars and the one inflicted by hurricane Harvey will be pronounced; one that healed but never quite disappeared.

I will spare you the details of my specific experience because those are a dime a dozen. I will sum up the impact of Harvey with a few words; destruction, revival and resilience. Destruction not only encompasses the physical damage that Harvey inflicted but also the mental. The daily routine of individuals to multi generation old gatherings in the heart of the Texas coast will be forever changed. Yes, I said changed; but not forgotten or revived. The memories of places like Rockport are what we hold true to heart. These memories are the fuel driving their survival. Whether it be, “The charm of the Texas coast” or “A sleepy little drinking village with a fishing problem”, I will remember it as my life. I’m not about to let the sublime dreamy ambiance of such a place wash away. It’s my life… I decide.

Revival: An improvement in the strength or condition of something. As a marine ecologist by degree, and fishing guide by heart, I believe that hurricane Harvey flushed and cleaned the ecosystem surrounding Rockport Texas like nothing seen in decades. It’s difficult to look at the terrestrial landscape and also understand that the marine environment benefits from such destructive forces. As one environment is destroyed another is created. Freshwater inflow and a “flushing” process is important for the long term survival of the saltwater ecosystems. New structures such as sandbars, cuts, wrecks and debris will provide structure and habitat in the years to come. I am visiting this new post hurricane habitat at a regular basis for work and pleasure. It hasn’t been easy but this leads me to my next word: Resilience.

Resilience: The capacity to recover quickly from difficulties. I’ve seen a thing, or two, or three that have left my mouth agape over the past few years with Harvey the latest. It hasn’t been easy dragging out my boat that survived. Initially, I felt guilty while fishing because so many people were still trying to find their shoes. I’ve seen a few float by over the days and I wonder where they came from and who they belonged to. On one such occasion my lost sandal train of thought was interrupted by my rod bending and my drag screaming. The rate at which my drag screamed was equivalent to that of my pulse. I had forgotten the feeling of that thrill, and it didn’t take long to justify my initial guilt with remorse. I had forgotten who I was and I hate to forget, especially my own identity… But I remembered.

Just a little over a month after Harvey, I found myself drifting the flats of Redfish bay with my father. The destruction that we drove by on the way to the boat ramp was lingering as we passed more on the water further solidifying the idea that we were going fishing one month after a category four storm ravaged the area. Only once the horizon was a distant blur and the only thing we could see was fishy looking water did we forget about what we had just seen. I think it was the second my father’s drag first screamed that I realized not much had changed on the water and it left me with an ear to ear grin that almost fractured my face. From that moment on, we caught fish, talked and remembered. Memories drifted to and from myself and my father as we drifted the flats with lures. Everything from the one eyed state record pin perch “Moses” that we caught years ago to scientific studies of cats being thrown off of buildings to see if they’d land feet up were topics of conversation. It was nice catching some fish but it didn’t matter because I remembered…I found myself. A few beers later, a stomach full of redfish, ironically Bob Dylan – Hurricane, and pops sound asleep snoring to the old tune; I write this.

Enough with the jibber jabber, what’s up with the fishing in the aftermath of a cat 4 hurricane? Truth be told I’m becoming more and more excited each time I go out. Monster high tides not associated with Harvey and the occasional cool front have pushed fish into areas that are sometimes inaccessible. A tremendous lack of reliable bait sources has left my shoulder tired from cast netting and my fingers slick from the oily scent of many soft plastics. Both plastics and dead bait such as cut mullet and dead shrimp have been productive. Let the water determine your style. Sometimes live croaker and live piggy perch are available but based on the current environmental factors and availability of bait to purchase I will be using lures, live shrimp, dead shrimp, cut mullet, and anything else that I can get my hands on. A box of your favorite lures, dead shrimp and cut mullet can take you a long ways on a good day right know. Don’t forget your cast net!

As always the presence of bait fish in a given area is never something that you should pass up. Rafts of nervous mullet, jumping shrimp, flipping shad, mud boils, v- shaped wakes, and slicks are all giveaways when locating fish. The water quality is also very important in the wake of the storm. There’s lots of fresh water and flood water mixing with gulf water thus creating a full spectrum of hydrological scenarios. Don’t pass up the obvious signs even if the water looks off colored. Most of the saltwater species that I target inshore have the ability to thrive in what some might consider less than desirable conditions. One of my friends caught redfish in water that he described as black a few days ago. Don’t let the reverie of turquoise green water blind you from the truth. The bays are still flushing with each lunar cycle and hydrology is constantly changing for the better with each flood and ebb tide. The fish have to deal with the same mess underwater as we do on land; rarely do I forget to eat.

Today was one occasion that I almost forgot to eat. I took a long time customer out, just himself and I. From 8:00 am -2:00 pm I never had a chance to eat my full lunch. Each time I started to eat, one of our rods was bent with a fish on the end. I found myself eating the last of my lunch once I got home. I stare out of my window now remembering today, even though it’s not over. This is why I do what I do; it makes me happy. Tonight I will dream and hope for another day like today. For now I will forget about the “H words”, those are in the past for now. I will continue to pursue my dreams as I’m not about to let a storm blow them away. When I get sad or frustrated with life my therapy rests only a few feet away from me in the form of a rod and reel. Maybe it’s time for you to forget about the turmoil of life? Just give me a call and come on down to Rockport, Texas; I didn’t blow away and neither did the fish. Be courageous and stay strong! 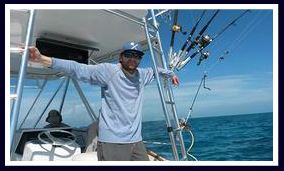 “Courage is being scared to death – but standing up anyway.”